Ladakh is a magical place. I was fortunate to spend a month there in October, 1989. Beyond all the wonderful, scenic vistas and people, one of the most interesting events I attended was a rally for Union Territory status. The rally was set for October 27th, the day the Indian troops first entered Kashmir in 1947. The day is very symbolic to the people, because both Kashmir and Ladakh were planning “bandhs”, the local equivalent of a strike. In Kashmir, the people were another Indian population that were striving for some autonomy from the state. Ladakh had different ideas. They desired Union Territory status from Kashmir.  They believed that they had little political authority in the Jammu and Kashmir government. A Union Territory would preserve their culture and heritage. Also, the Kashmiris were hoarding the state and tourist money, keeping the business and cash in Kashmir and not Ladakh. 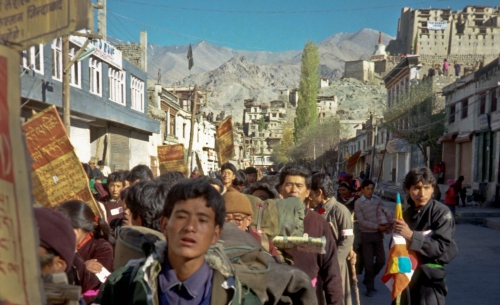 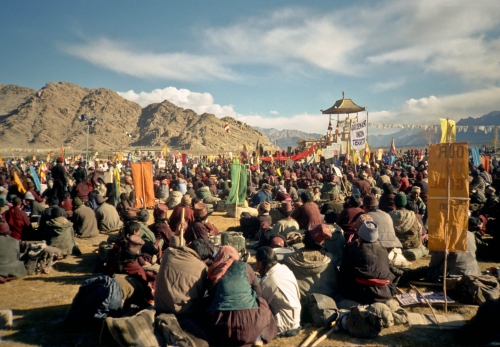 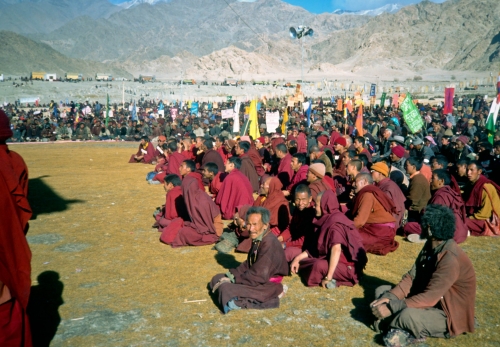 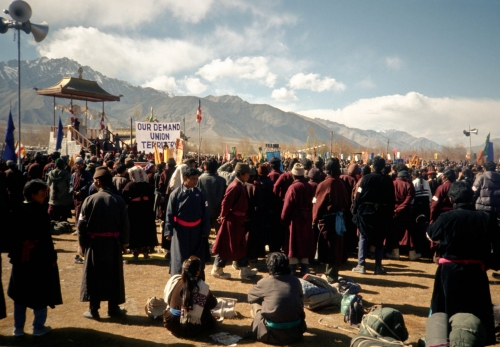 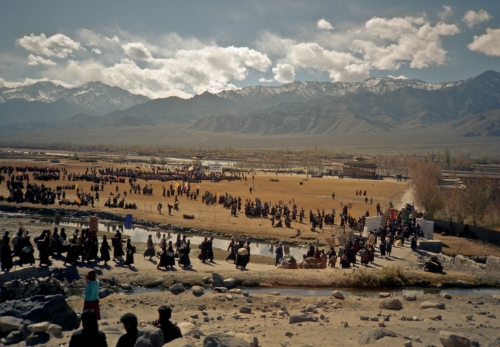 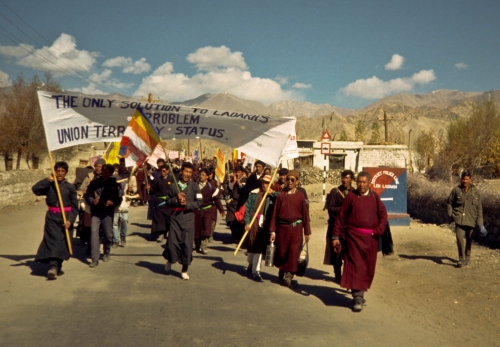 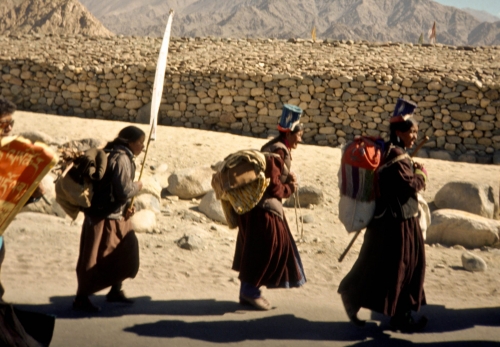 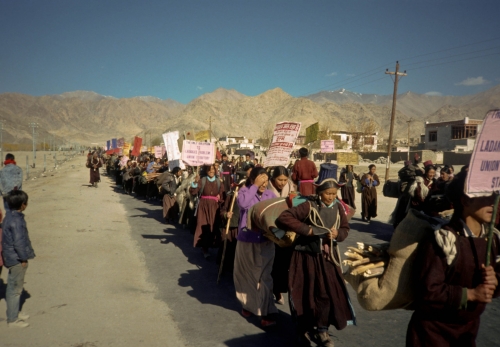 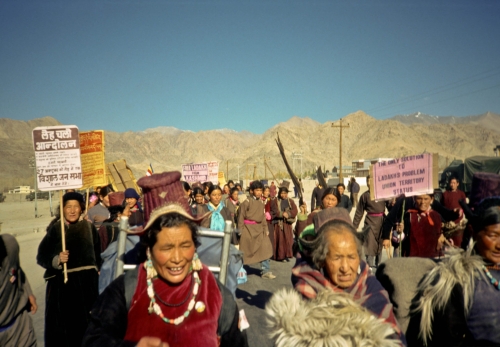 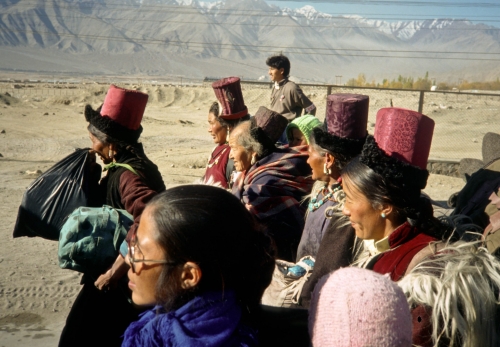 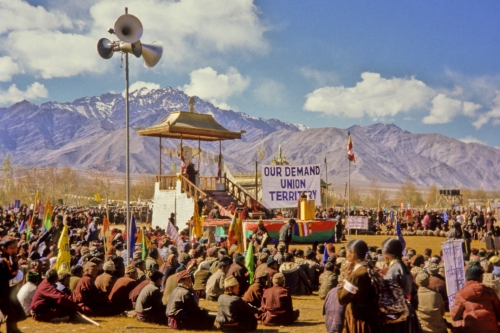 March to the Dalai Lama’s Home in Ladakh

Another beautiful morning. The sky is deep cyan blue, the poplars rippling from green to yellow, and the sun shines brightly, warming everything. The Stok mountain range with its light coating of snow reminds me of the hike we took last week. All this from the hotel room window. Fabulous for 50 rupees.

Today was a wonderful day. Almost to the point of cultural overload. Kim and I walked to the main gompa in town and waited along with everyone else. People started to stroll in, children, blankets, varied backpacks and carrying systems, pots and pans, stoves, firewood, but most of all, all sorts of banners and flags. Young men and women, moms and dads, all dressed in traditional Ladhaki dress. At nine on the mark, the queue walked around the gompa and out into the street. We joined the Ladakis, wanting to go all the way to Choglamsar, being part of this wild process.

Winding down, slowly the crowd of people walked towards Choglamsar, out of Leh. Along the way, various people would lead chants and slogans in Ladaki.  Clueless due to our language barrier, Kim and I didn’t know what was being said, but it was obvious that the people wanted Union Territory.

Passing people on the road in southern Leh, many would join in and walk. Some would just watch; for varying reasons they would stay behind. I couldn’t help smiling and chuckling when we we would walk past all the Indian police and military lads. This way, we were both amused by the others situation. Heck they’re foreigners, too. Finally we pass the TCP, a travel check point.  I remember walking amidst all the local people; the men wearing long coats, very elegant. The women were amazing with their jewelry. With Ladakh so far from the ocean, pearls were hugely valued. The colors of white, red, and turquoise were common to all. After about five miles, the march began down, down the road to the Dalai Lama’s home in Ladakh.

Arriving was an amazing experience. People were all over the area, maybe one thousand who made it earlier. Near the gazebo, with a statue of Buddha was the microphone, monks, and the collective center of the rally. Near, a sign was erected: “Our Demand: Union Territory”.

So we and the rest of the Leh contingent marched in, naturally walking in a circle, left around the center, just like a mani wall. Spitok, Stok, Thiksey, all the villages nearly slowly walked in after us. By 1 PM, almost everyone was there. Truly a wonderful planning job considering everyone arrived on foot.

So 18,000 people had come. Union Territory was their hope. Kim and I were the only foreigners there.  We sat and listened and observed the peacefulness, the wonderful collage of people, without really having a clue what was going on around us.

[Based on my journal entries.]